Injured by a driver while walking or biking? We’ll help you get the compensation you deserve. 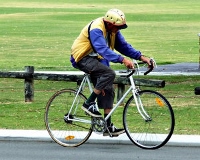 Georgia can be a very unsafe place for pedestrians crossing streets, walking or working along roadways, or in parking lots. It can also be a very unsafe place for cyclists. These accidents regularly occur because automobile drivers are not vigilant in maintaining a lookout for walkers, runners and bicycle riders. These collisions take place despite the caution generally exercised by pedestrians and cyclists. Unfortunately, even a minor collision between a pedestrian or cyclist and any motor vehicle can result in catastrophic injuries, if not death. These types of collisions are all too common on our roads and interstates today.

If you or a loved one has been injured while walking or cycling by a driver and you would like to speak with an attorney, please contact us today. We have achieved significant results on behalf of our prior clients in handling such cases.

Here are some testimonials from satisfied clients we have represented in the past.

Below are some facts about bicyclists from the Georgia Department of Transportation, from the latest statistics report compiled for the years 2000 – 2006:

And, here are some statistics on Pedestrian injuries in Georgia, compiled by the National Highway Traffic Safety Administration (NHTSA):

If you or a loved one has been injured while walking or cycling due to the negligence or carelessness of a driver, The Bennett Law Group can help. The filing of a personal injury lawsuit is a complex process that requires specialized knowledge of the legal system in Georgia and specific resources that are not always readily available to the general public. If you have been injured by the recklessness of another through no fault of your own, it may be possible for you to receive compensation for lost wages, medical reimbursement, costs of future medical treatments and rehabilitation, diminished earning capacity, as well as the pain and suffering that you have endured. Contact us online or call us for a free consultation at 404.541.9330. Our bicycle attorneys serving Atlanta and the metro Atlanta area are here to help.